1. Weekly Market Update: Major Averages Consolidate at All-Time Highs (S&P 500 & Nasdaq) as Earnings Impress. This week earnings reports surprised to the upside as 78% of companies have now reported better than expected profit results. Adding to the positive news, we learned today that the US economy is humming along, growing at a much better than expected 3.2%. However international readings out this week indicated stagnant growth. For the week U.S Small Cap stocks were the best performer, closing up over 1.7%. Taxable and Municipal bonds had a good week, both closed up over .50%

2. Very Healthy US Economic Growth! Gross domestic product (GDP), the broadest measure of goods and services produced in the economy, rose at a 3.2 percent annual rate in the first three months of the year, the Commerce Department said Friday. “Rumors of the economic expansion’s death appear to have been greatly exaggerated” quipped the New York Times. Meanwhile, South Korean gross domestic product, a barometer of global strength thanks to the nation’s export-heavy economy, shrank the most in a decade in the first quarter. Economic reports out of Europe also indicated slow, stagnant growth.

3. Earnings Parade: After each quarter we get corporate earnings season which we are half way through right now. More than 170 S&P 500 companies have now reported  results, according to FactSet. 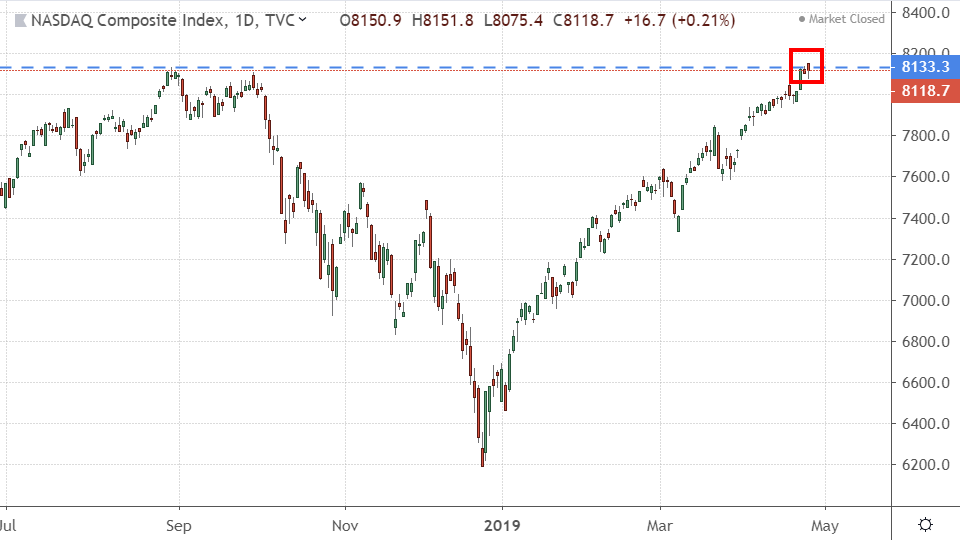 Of those companies, 78% have posted better-than-expected earnings. Many analysts had forecasted lower earnings growth for 2019 and 2020 given the global economic slowdown and the fading tailwind of the 2017 corporate tax breaks.   It appears that analysts and investors may have cut their earnings forecasts too much going into this reporting season, which is evidenced by the number of companies who are handily beating those forecasts. The technology stock laden Nasdaq has hit a new all –time high as tech earnings have been quite good overall.

4. S&P Run, Forrest, Run: Former Colleague, Economist and Market Forecaster Ed Yardeni remains very impressed with this bull market and is calling for more upside. Ed notes that forward revenues and forward earnings per share estimates have proven to be good leading indicators for the market. Ed explains more in this video.

5. Trade: Inching Closer to a Deal? Addressing some 40 world leaders at the Belt and Road forum in Beijing, Chinese President Xi Jinping spent a large portion of his speech talking about Chinese domestic reforms including of state subsidies, intellectual property rights and foreign investment. All are issues the U.S. has raised. Negotiators led by U.S. Trade Representative Robert Lighthizer and Treasury Secretary Steven Mnuchin will travel to Beijing as both sides seek to have a trade agreement signed in the coming weeks. With today’s strong GDP print, the US bargaining position has not weakened.

6. Microsoft joined the $1 trillion club, making it the third company to do so besides Amazon and Apple. 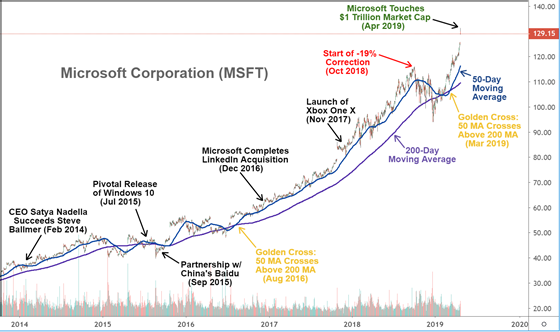 Those two held the title for a few days last fall, but fell back under the mark during December's brutal sell-off. Microsoft was the largest company in the world in 2000. It is again today. On the top ten list of the biggest companies in 2000, only Microsoft remains. Microsoft attained the trillion dollar valuation Thursday on the heels of a strong third quarter earnings report.