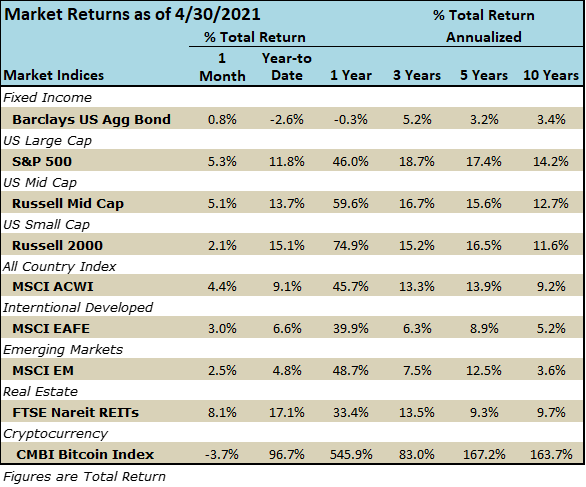 From a style standpoint, value and growth sectors were much more aligned in April than March.  Below we’ve recreated last month’s chart and added April to show how the divergence in returns was much smaller.  While short-term swings always occur, we still believe growth sectors like healthcare, technology and consumer discretionary are attractive long-term performers. 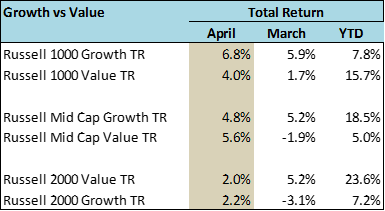 Looking at the U.S. market through its different economic sectors reveal some interesting actions as well. Commodity industries (basic materials) had a solid monthly return and we’ve seen evidence of that in the real world with price hikes in lumber, copper, and grain, to name a few.  However, just as strong during the month were the technology returns which is a distinct growth sector.  The top five performing sectors of the market derive from such different parts of the economy.  This shows us that there is tremendous market breath and demand activity through the economy. 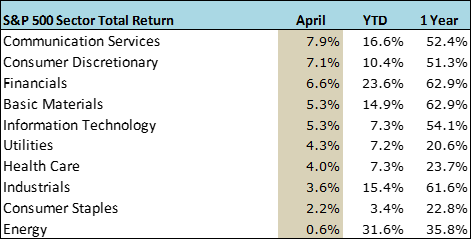 International equities were up, but not as much as domestic equities for the month.  We believe the same factors of a slow vaccine roll-out and more restrictive economic movements were hampering the rebound.  However, we still believe that pent-up demand in areas like Europe are just as robust as here in the U.S., and would not count out a strong reopening outside the U.S.   It just may take a few more months to transpire.

We highlighted SPACs (special purpose acquisition companies) last month and noted that their popularity and performance was beginning to wane.  The pace of new SPACs came to an abrupt halt when the SEC issued a statement re-visiting warrants, used by SPAC founders, which may now be treated as liabilities, greatly affecting the SPAC’s attractive route to public market status.  We don’t think it’s a coincidence that the pace slowed down in April, as a result, as shown in the graph below. 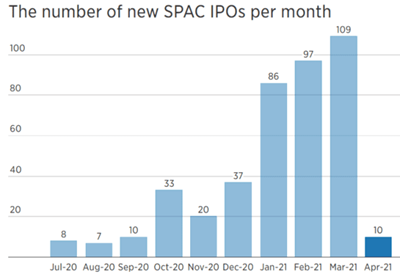 APRIL BOND MARKETS:   Interest rates dipped a bit this month (down 10 basis points), after a big uptick in March (up 33 basis points).  The Fed continued its stance of keeping rates unchanged at the last FOMC meeting and committed to keeping them low for the foreseeable future.  Again, we’ll have hot debates about whether or not inflation is temporary (as the Fed suggests) or persistent (as some economists portend).

The monthly return for the Barclays Aggregate bell-weather benchmark rose 0.8% in April, but is still negative for the year at -2.6%.  We continue to believe that intermediate and long-dated bonds may suffer in the short-term with the swift rise in rates.

Munis had another good month, which has been the norm versus Treasuries.   Fund flows into municipals were up again in April and year-to-date stand at $41.5 billion of inflows, the fastest start to any year on record.  Demand remained strong and deals were oversubscribed.

ECONOMY: Economic indicators reported in April were all positive and numerous, we list out a few important ones below:

Inflation: Inflation is increasing and we see it in everyday life (milk, propane, etc). The Fed’s preferred inflation measure is the Personal Consumption Expenditures (PCE) Index. As the chart below shows, there is an upward trend in the month-over-month figures.

The word “inflation” was mentioned on first quarter earnings calls by hundreds of management teams.  Honeywell Industrial’s management summed it as follows, “And for us, inflation is taking hold.  There is no doubt about it.  We knew it.   We see it.  It’s real.  I don’t think things are going to abate, we do expect an inflationary environment this year.”

One of the biggest questions facing the markets is, will inflation be temporary, as the Federal Reserve suggests, allowing them to keep interest rates low for long period of time.  Or, will inflation be persistent and stay at higher than accepted levels (above 2.6%) and force the Fed to hike rates sooner?  Any rate hike earlier than expected will put a damper on equity returns.   We don’t own the crystal ball that can answer these questions, but we are staying on top of all the data, as it will inform our overall market outlook.

The U.S. reported robust growth in the first quarter as measured by GDP.   The U.S. clocked in at an annualized rate of 6.4%. Moreover, forecast for full year GDP are in the 6.5-7.5% range when sampling current economists and strategists.  Growth in the U.S. is not the only bright spot.  The chart below shows Alliance Bernstein’s real GDP growth estimates for 2021 and 2022 in different regions.

Globally, we’re looking at nearly 6.0% worldwide production.  The one caveat to global growth could be the worrisome COVID-19 outbreak in India which is spreading exponentially.  A prolonged battle with the disease in this high-growth country could dampen the world outlook, but it’s simply too early to tell at this juncture. 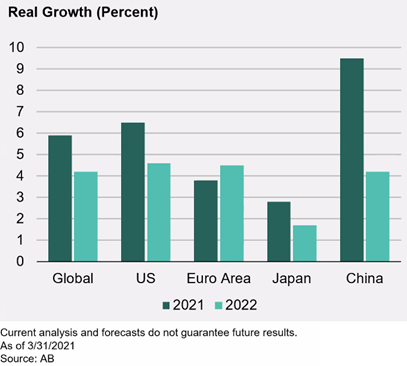 Biden has announced three mega spending plans since taking office.  First was the $1.9 trillion American Rescue Plan (aka COVID-19 stimulus) which was passed by Congress in March.  Then came the American Jobs Plan, the $2.3 trillion infrastructure bill aimed at rebuilding bridges and roads (and a lot that doesn’t technically look like infrastructure).   Then last week Biden unveiled the third stimulus proposal called the American Families Plan, costing $1.8 trillion.  This act directs money to childcare and paid family leave.  How to pay for all this spending is the key and Biden has initially proposed to two tax increases (corporate tax hikes and individual hikes on capital gains tax).

As part of the American Families Plan, Biden has proposed an increase to the capital gains tax to 39.6% for those households that make over $1 million in annual income.  Those households in the top bracket also pay an additional 3.8% tax for Obamacare so the resulting full Federal cap gains rate would be 43.4%.  If those high earners live in NY or CA, the additional state cap gains taxes push up their overall gains rate to over 50.0%.

We note that neither the infrastructure or family plan proposals have started the discussion/negotiation process in Congress yet, so we are still in the early stages.  Clearly there will be a party split on tax hike proposals, but there is even disagreement among democrat party members regarding the tax increases.

How to pay for the ultimate ticket of these large packages is unknown and we remind investors about the difference between Biden proposals and what can eventually pass in Congress.  Tax increases have been notoriously difficult to pass and just a few dissenting democrats (Senator Manchin) may derail the current ambitious plan.  We expect this back-and-forth negotiating will last as least until the third quarter of 2021. Ultimately, the increases may not be as high as feared, and nothing we are hearing is suggesting the increases could be retroactive to current tax year 2021.

COVID-19 UPDATE:  Cases have trended lower in April which is probably the best news in this whole write-up! Recent data shows less than 30K cases a day in the U.S., down significantly from the 300K+ daily cases recorded in January according to the Johns Hopkins Coronavirus Resource website.  Vaccinations and warm weather are likely helping to reduce outbreaks.  We now are entering a stage where there is more supply of vaccines than demand. We are not at heard immunity yet, but the U.S. has come a long way.   Once again, we need to recognize the amazing work done by the healthcare industry from R&D, to manufacturing, to supply roll-out.  It’s been a great five months of progress since the FDA first awarded emergency use of COVID-19 vaccines in December.

With spring in full-force and more friends and family becoming fully vaccinated, we truly are seeing green shoots of optimism in our attitudes, our economy and our investment markets.  We hope this optimism can carry us through the year, but we must remind ourselves that volatility is likely to creep into the markets as we observe inflation, political battles over tax increases, and increased deficit spending by our government.

As always, we welcome your comments.