1. Weekly Market Summary: The performance chart below tells a rosy tale. We just closed out another good week for equities, adding to already robust gains for the year.  Emerging markets stocks led the way posting a 3.4% return and all other major averages were up over 2% as well. Today’s much anticipated jobs report offered reassurance that the economy is doing just fine. Other economic reports were generally positive in the US and abroad.  Looking forward, market movements will hinge on news on a trade deal and corporate earnings reports. 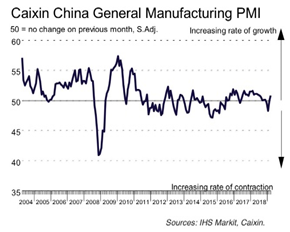 The most important economic number in quite a while came out with a positive reading this morning. The economy added 196,000 jobs in March (vs the 177,000 estimate) which is a far cry from the 20,000 number that scared economists, investors and traders last month. This number was viewed as an important all clear sign for the markets and the economy. Selloffs rarely occur when the job market is robust. The second most important piece of economic news came in the form of the Chinese Purchasing Managers Index which bounced to a growth reading of 50.5. A reading above 50.0 indicates the world’s second largest economy is now back in expansion mode. The Caixin/Markit Survey, which surveys private companies, also showed robust manufacturing and purchasing activity in China. Keep in mind, China, like the U.S. and the EU, has been stimulating its economy through monetary policy and tax cuts. In early March, China announced tax cuts totaling $298 billion, as well as a cut to a value-added tax for transportation and construction sectors from 10% to 9%, and for manufacturers from 16% to 13%. These measures appear to be taking hold for the positive.

A “Golden Cross” is what Traders label a phenomenon which occurs in rally where a security’s shorter term 50 day moving average crosses it’s longer term 200 day moving average. Traders believe a golden cross to be a very bullish signal which indicates an acceleration of upside momentum. Major averages such as the Dow and S&P 500 and the Shanghai Composite have just seen their 50’s cross their 200’s to the upside. Since 1980 there have been 13 golden crosses for the Dow and S&P 500. These major averages have traded higher in 12 of these 13 occurrences, and the average gain six months later has been 6.7%. Onward.

4. Trade Positives…Getting Sick of Trade Talk?  Me too. Both China and the U.S. made positive noises about progress at this week’s trade talks in Washington. Chinese Vice Premier Liu He, who led his country’s negotiations, said the two sides had “reached new consensus on such important issues as the text” of a trade agreement, while President Donald Trump talked up the prospects for a “monumental” deal. President Trump said this morning that he'll know in the next four weeks whether or not there will be a deal. There has been speculation that Trump will announce a summit date with China's President Xi if there had been sufficient progress made this week.

5. Inversion Reversion: We mentioned last week that short term interest rates had dipped below longer term interest rates- a phenomenon known as an “inversion.” One of the reasons for the positive move in stocks this week was a reversal in rates.  Some, but not all economists, view an inverted yield curve as a sign of future economic weakness. The last 7 recessions in the USA (since 1965) have been preceded by an inverted yield curve, i.e., the 3-month Treasury bill yield exceeding the 10-year Treasury note yield. There were also 2 “inversions” that were not followed by a recession within a 12-month period (source: Federal Reserve Bank of Cleveland).

6. April is Historically a Good Month: 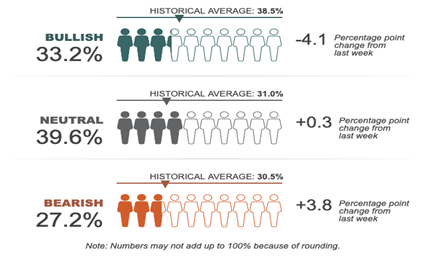 April has historically been the best month for the S&P 500, averaging a return of 1.9% and the S&P has not had a negative April since 2012. The Dow has not seen an April decline since 2005. Since 1950, the average Dow April gain is 2.6%.  P.S. This guarantees nothing, but it is notable. What is also notable is how strong the rally was in the first quarter despite the fact that investors had fled the stock market in droves in December and January, pulling $88 billion out of equities and hiding in cash and money market funds. That means there is a lot of money on the sidelines and a lot of investors suffering from FOMO (Fear of Missing Out). Still, investors are still wary of the stock market, even after the strongest rally in 20 years. The American Association of Individual Investors weekly survey of investors shows that only a third of those surveyed are bullish about the direction of the market in the next six months.

7. It’s Not All About Stocks. Commodity Prices were up close to 2% this week and are up 9% year to date. Oil is leading the charge having its best quarter since 2009. West Texas Intermediate crude oil, the U.S. benchmark, rallied 32.4% in the first three months of the year, its best quarterly performance in a decade. OPEC continues to keep the squeeze on production. 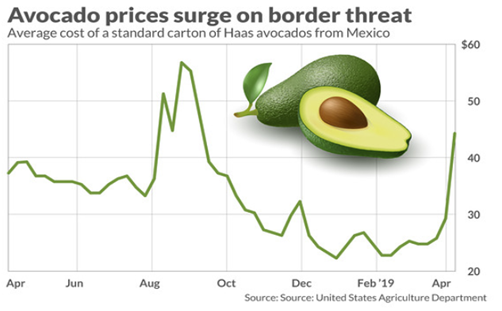 This week a lesser known commodity….Avacados made the news soaring 34% on Tuesday (the biggest one day jump in a decade) as President Trump threatened to close the Mexican border. There were scary headlines like: "Millennials in Crisis as Avocado Prices Soar", "The Worst News Ever...Avocado Prices are Skyrocketing", "U.S. to Run out of Avocados in 3 Weeks." Closing the border is actually a serious matter for trade and avocados are just one product that would be impacted by an actual border closure and trade stoppage. According to the U.S. Chamber of Commerce, nearly $1.7 billion of goods and services flow across the border daily, as well as nearly half a million legal workers, students, shoppers and tourists. Still, it's the buttery fruit from the Mexican state of Michoacan that got a lot the attention. The U.S. gets 90% of its $2 billion worth of avocado imports from Mexico.