1. Weekly Market Update: “The Grinch stole Christmas, but then gave it back” is how one portfolio manager described this volatile week. This week was one for the history books. After a brutal prior week, sellers were still firmly in charge on Monday, Christmas Eve, as the market declined another 3%. The market thankfully closed Tuesday- Christmas day. After a brief rally to start Wednesday, sellers gained control again and pushed the market down to its 200 week long term moving average and trend line. It was here where buyers stood firm ground.  The market began a historic rally which erased Monday's selloff and most of the prior week's losses. The DJIA and S&P 500 posted their biggest one day point gains in history, and each closed up 5% on the day.  The Dow closed up a mammoth 1,050 points. Then Thursday, after a very rocky start, the indices started to surge again at 2 pm and major indices closed up between 0.4% and 1.1%. The Dow surged 850 points off of its low, the biggest intraday comeback for the index in 10 years.  Friday stocks mercifully traded in a relatively tight and stable range.  For the week US equity markets closed up 2.5-3.5% while International markets were up 2% on average.

2. A Tough Down Quarter Comes To An End: Where does the market go from here?  The Graphic below from BeSpoke Investments tells an interesting tale. Typically after a very red quarter, there is a fair amount of green going forward. We’ll see… 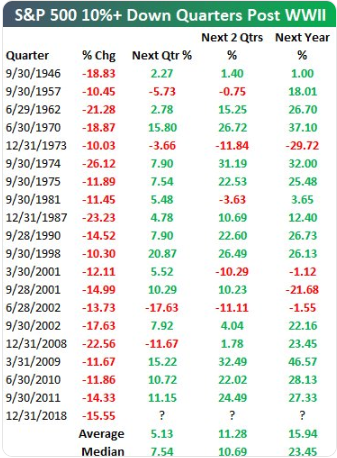 3. A Tough Down Year Comes Close to an End: Perspective from Schwab Strategist Liz Ann Sonders:

What we’ve seen this year is perhaps not as extreme as many think (although if 2017 your proxy, it’s been tough): S&P was down 16% from its high as of Monday- Christmas Eve close.

4. Why the Big Bounce? Technical Perspective: When markets are searching for a clue and the fundamental picture is cloudy, technical analysis can be quite helpful. This week we reached the S&P 500’s 200 week moving average which is a powerful trend-line for support. This moving average also coincided with the market’s long term uptrend. Bulls made a strong stand at this 2345 level. Given the massive amount of buying that ensued, this level will likely continue to be a significant support level. 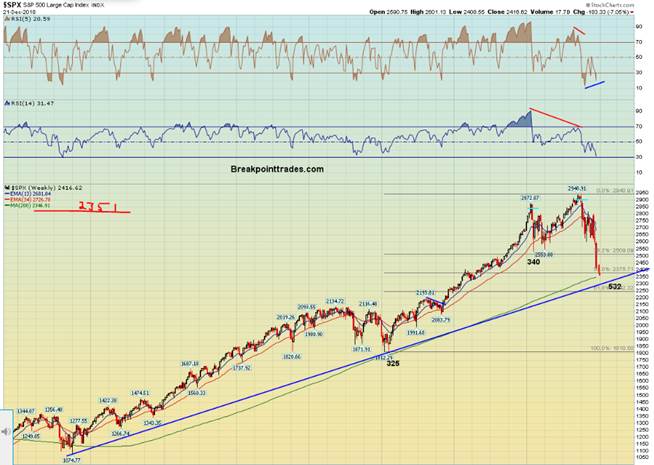 5. Good-bye Government: We are now into day seven of the shutdown with no wall compromise in sight. Each day the unfunded portion of government is closed, GDP will decline by $1.25 billion; a bit more than a twentieth of a percent a week; unfortunate but manageable. A big concern: Will those laid off get paid for the time they couldn't work? An even larger concern: Will Congress raise the debt ceiling before the government runs out of money in summer? A standoff there would be quite troubling. Only some lawmakers returned to Washington from their holiday break Thursday and Friday, and no votes are scheduled yet.

6. What’s Next? JP Morgan kicks off earnings season shortly into the New Year on January 15th 2019. Since we have no resolution from the Fed on rates increases and we do not have a trade deal, earnings season becomes particularly important. The S&P 500 is currently trading at a very reasonable 14.5 times current earnings.  The Street will key on corporate commentary and the likelihood of consensus S&P earnings growth of 5-6% next year. Reassuring forecasts could be quite helpful. Of course interest rate and trade developments will continue to be key as well.