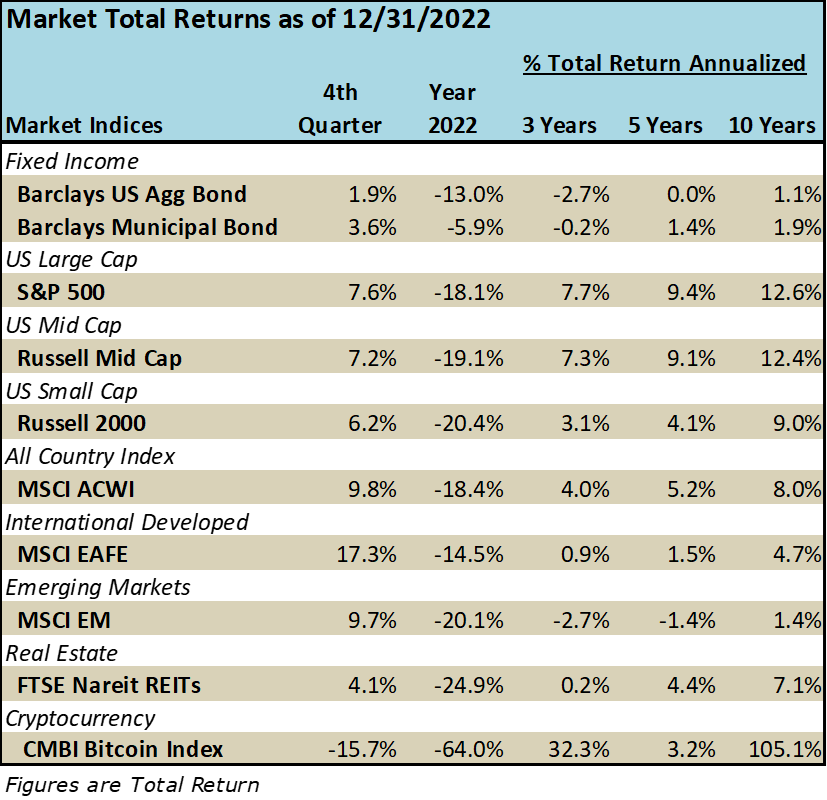 The year 2022 never had a chance of success as witnessed by the first week of trading that saw record new highs in early January erased within days, followed by a correction (-10%) and a bear market (-20%) in equities in a short period of time.  Two key worries brought markets from their lofty perch; inflation fears and recession fears as a result of Fed monetary tightening.  These two themes played out without much clarity on either front until later in the year.  Markets tend to be more volatile during Fed tightening years and 2022 kept to this script.  While we had two rallies in the late summer and late fall, they did not last.

ECONOMY AND THE FED

We saw inflation rates hit a 40-year high which brought unprecedented levels of Fed interest rates hikes.  Inflation, as defined by the Consumer Price Index (CPI), hit a high of 9.1% in June and then finally started to decline and stood at 6.5% in December.   This is still far above the Fed’s desired inflation level of 2.0-2.5%.  We started to see inflation pick up in 2021 and only increase in 2022.

In 2021, the Fed continuously told the market that inflation was “transitory” and just a function of supply chain disruptions that would work itself out over the months ahead.  That become one of the biggest Fed Reserve blunders in recent history and why we felt the harsh sting of financial markets retreating rapidly in 2022. As we said before,  Fed tightening usually brings about market volatility, but the surprisingly aggressive hikes the Fed embarked on, caused even more turmoil than normal.

To combat inflation, the Fed used its only tool, interest rates, to drive inflation back down.   The Fed telegraphed its position on tightening and followed through with that by implementing four consecutive 0.75% hikes, never seen before in Federal Reserve history.   The graphic below illustrates how steep the Fed Fund rates rose during calendar year 2022 compared to two other recent tightening cycles over multiple years. 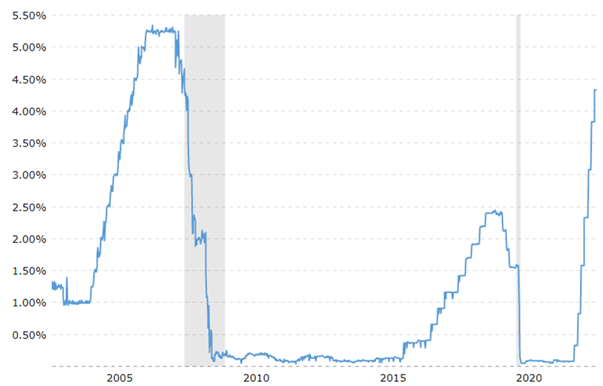 First quarter of 2022 saw both equities and fixed income markets fall in the 5-8% range.  The down trend picked up speed in the second quarter and by mid-year most equity regions were in bear market territory.  The S&P 500 benchmark index was down -20.0% and the international equity benchmark, MSCI EAFE was down -19.6% as of June 20, 2022. Third quarter returns were also negative across the board adding to the year-to-date declines.  Luckily, markets turned positive in the fourth quarter due, in part, to concrete signs that a pattern of slowing inflation was finally taking hold. As seen by the chart on the first page, indexes finished off their intra-year lows, but still solidly in negative territory.

Looking at the returns by economic sector also tells a stark picture of the winners and losers during the year.  The best performing sector was energy which saw oil prices shoot up in early 2022 as Russian invaded Ukraine and created an energy crisis for Europe and beyond.  Combined with strong demand from economic reopening, the supply and demand balances were upended and prices for oil peaked over $120/barrel before settling back down into the $70-80 range.

The worst sectors including technology, consumer discretionary and communication services all shared a few things in common.  These three sectors contain the mega-cap technology-related winners of 2020-2021.  Apple, Netflix, Microsoft, Google, Amazon, Snap, to name a few, all had terrible returns in 2022 and we have commented on this in other Market Perspective pieces throughout the year.  Declines were brought about by a combination of macro worries (declining demand from inflation and declining valuations from rising interest rates) and by company specific issues (factory shutdowns in China affecting Apple’s production, competition eroding Netflix’s subscriber growth, billions invested with no return in Meta’s new platform, etc.). 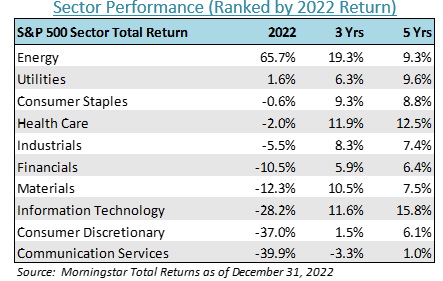 On the international front, equities fared about as poorly as their U.S. counterparts.  As the U.S. embarked on aggressive interest rate increases, our bonds had more attractive yields across the globe and demand for treasuries meant acquiring dollars to purchase them.  Additionally, the U.S. economy was on stronger footing than other countries and led to funds flowing into U.S.   The strong U.S. dollar was a key factor that hurt international equities in 2022. 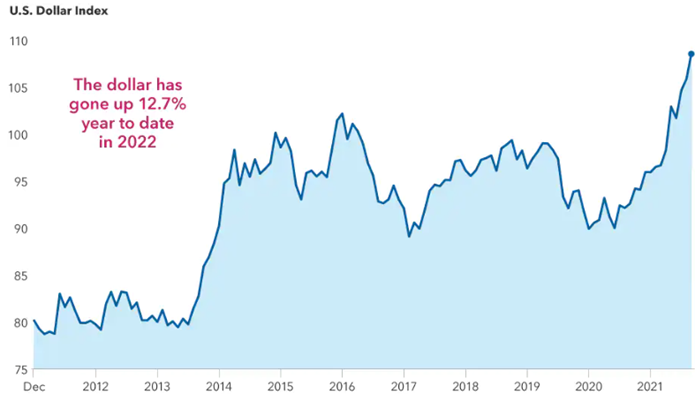 Inflation in the U.K. peaked above 10% during 2022 and fears of a cold winter in Europe fueled the markets decline because the region is reliant on Russian gas for some of its energy needs.

Emerging markets underperformed Europe and the U.S. due in part to the reliance of energy imports and weakness in the export markets for their goods.   High oil prices and slowing demand created a double hit for emerging countries.  Adding to this, China was still grappling with their COVID response, and lock-down policies had an immediate adverse effect on its economy and markets.  At its worst, the Hang Seng Index was off -37.5% through early November before recovering in December.

What was more jarring than the equity bear market, which is common every 10 years or so, was a major downturn in the fixed income markets that we have not seen since the great depression and the largest decline in the history of the Barclays Aggregate, which started in 1976.

The year started with a very hawkish Fed which caused other central banks to follow with similar rhetoric.  Inflation quickly became a global issue.  Starting interest rates were low from a decade of easing central bank policies.  Thus, any increase in rate (and decrease in price) left no cushion to protect bond investors from lower prices.  As inflation continued to rise, the Fed was left with no choice but to move to an even more aggressive path of tightening and negative rhetoric.  This took investors, economists, and strategists by surprise.   The result was a double-digit negative return for the benchmark Barclays Aggregate Index.  The last time this benchmark had a -10%+ decline was before the benchmark was even invented (Great Depression).  In the last 47 years of returns, the Barclays Aggregate was positive for 42 of those years and the five negative years had drops between -1% and -3% before 2022’s major decline. This shows how unprecedented 2022 was in the fixed income world.

Another major issue regarding fixed income was the onset of the inverted yield curve which often time signifies an impending recession.  A typical bond yield curve is upwardly sloping providing higher yields for investors who are willing to take on a longer-term period of investment (risk).  A normal curve would have a two-year yield less than a yield on a 10-year bond.   When the yield curve is inverted and has higher short-term rates than long-term rates, the market is signaling that there is a higher probability of an economic slowdown.  The Fed increased the fed fund rate, which correlates well with the 2-year treasury bill, and we saw two-year rates shoot up from less than 1.0% to over 4.0% in a year’s time.  Long-term rate (10-year treasury) today is lower than the 2-year rate as investors worry about decelerating growth and the prospects of a recession. 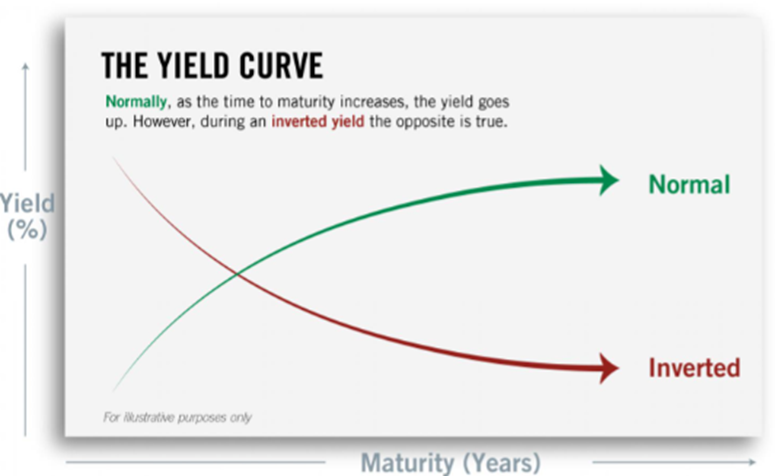 While the municipal market suffered its worst return in 20 years, the bright spot was that municipals handily outperformed corporates and treasuries.   Municipal fundamentals remained strong in 2022 with good state revenues generated from better economic growth and strong tax revenues.  However, the Federal Reserve rate hikes were a big contributor to fund outflows in municipals and strong fundamentals could not overcome the math of rising rates and therefore, falling prices.

The positive side of all the Fed tightening has been that interest rates are closer to their long-term levels than they have been in some time, and municipals, in particular, look like a good value today. The outperformance of municipals versus other fixed assets points to the rationale of having municipal bonds as part of the ballast of client portfolios, especially those in higher tax brackets. We see better demand for this asset class in 2023 and investors are finally getting better income generation off their bonds with rising rates. We have more to say on this topic in our 2023 Outlook piece.

In 2022, we made several asset allocation changes with the aim of protecting client portfolios, while still maintaining our clients’ long-term asset allocation objectives.  Our Investment Committee meetings focused on current market conditions and how we could help weather the storm for clients.  We discussed the attributes of portfolio construction during a downturn, for example, cash being “king”, quality shines through, and the importance of strong leadership in uncertain times.  We were also aware that tough times do lead to better times and there is a time to play defense and a time to play offense.  Out of those discussions came actions which we put into practice in 2022 and communicated to our clients throughout the year.

We made the following rebalancing moves during 2022 as it relates to an all-equity portfolio:

It’s times like these, when Sandy Cove Advisors can be helpful to filter out the noise and keep the focus on long-term investment returns for our clients so they can achieve their goals.  It has been a roller-coaster of major events and large market swings these past few years.  We benefited from three double-digit up years in a row in equities only to be left feeling glum about 2022 returns. We’re happy that, with our stewardship, our clients never lost focus to the benefits of staying fully invested.

Reviewing the events of 2022 provides the backdrop and perspective on our thoughts and outlook for next year.   We hope you will enjoy reading our market outlook,  which can be accessed here: 2023 Market Outlook:  Prospects Brighten as Fed Slows (HYPERLINK THIS)

We wish you all a healthy and prosperous new year.  As always, if you have any comments or questions, please feel free to reach out to us.