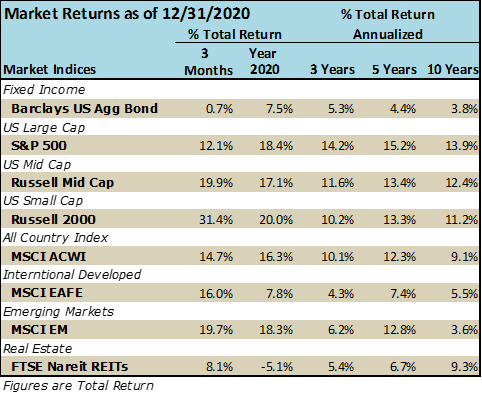 For many, 2020 was a year to forget.  Isolated from friends and loved ones, cancelled weddings and other important events were just the “good” parts of a year ravaged by a global pandemic killing 1.8 million people world-wide.  Collectively, we are all keenly focused on turning the calendar to 2021 with an improved outlook now that vaccines are being deployed.  But before we move forward, let’s reflect on what has been a terrible year for most everything, but financial markets.

We were reminded that markets don’t reflect real-time economic conditions.   They begin to recover far earlier than the economies they are supposed to reflect.  Markets are forward looking, discounting mechanisms and tend to price in what will happen 6-12 months ahead.  What the market began telling us in April was that the government stimulus and lower rates were pushing more money into stocks than other assets.  It was telling us that we would eventually heal the self-inflicted wounds we created by slowing the virus’ path of destruction.   It was telling us that 2021 would be a year of improved economic growth.

The S&P 500 produced a stellar one-year gain rising 18.4% when including dividends.  Returns in seven sectors were  up double-digits for the year, though even in that group there were disparities with tech-focused areas up much more.  Sector laggards for the year included defensive-types of investments:  utilities, financials, and energy. 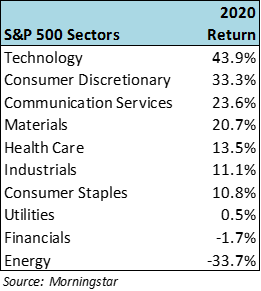 The technology sector of the S&P 500 was the clear winner up 44% for the year while consumer discretionary was a clear second up 33%.   The technology sector of the economy continued to benefit from long-term trends in artificial intelligence, cloud computing, internet of things, and electronic vehicles to name a few.  But in 2020, the tech sector also made leaps and bounds in market share gains in areas of e-commerce and “stay at home” themes.   Many tech firms like Zoom, Netflix, and Adobe cited 3-4 years of market share gains made in mere months as the pandemic quickly altered our way of life and we raced to adapt.  The consumer discretionary sector of the S&P 500 now boasts the inclusion of Tesla (TSLA) stock which joined the major index in late December.  Any owner of a passive S&P 500 index will now own a bit of Tesla.

Small caps had a particularly strong second half of the year.  This asset class is usually the first to rally out of a recession and into a new economic cycle and we believe this year proved no different.  Small caps, as measured by the Russell 2000 index, jumped over 31% in the last three months of the year after lagging their large capitalization counterparts to finish the year ahead of the S&P 500.

Another sign of a strong equity market is the number of new companies that went public.  For the year, 454 companies raised more than $167 billion on U.S. exchanges (see chart below).  Nearly half of those offerings were in the form of a blank check or SPAC (specialty purpose acquisition company).  SPACs enter the public domain with no profit or no revenues.  They are formed quickly to raise money from the public to then use that capital to acquire existing companies.  SPACs usually enjoy a resurgence in popularity during strong or overly exuberant market conditions.  When the Federal Reserve unleashed extraordinary measure to boost the economy during the pandemic, the IPO market gathered steam.  Notable newly public companies include Airbnb, DoorDash, McAfee and Snowflake. 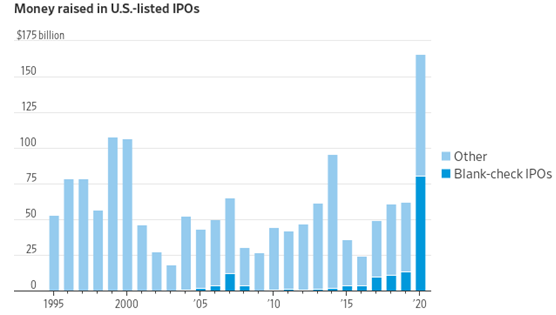 Outside the U.S., strength was seen as well.   Emerging markets posted strong results despite the pandemic raging in major large countries like India and Brazil.  However, China outshines all other EM countries with its 27% gain for the year.   Since China is more than a third of most EM indexes, it drove the overall results. 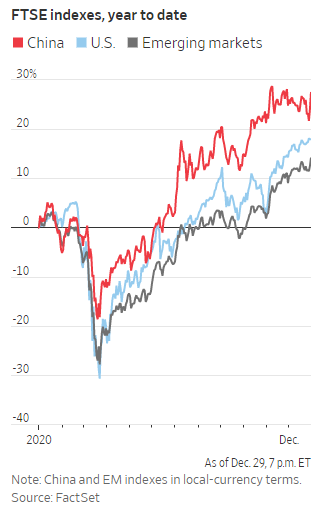 The troublesome picture for corporate and municipal bonds that was predicted in 2020 after the pandemic hit never materialized.  Crisis was averted in large part due to the swift actions of the Federal Reserve to back the fixed income markets in a myriad of ways.  Shortfall predictions by municipalities were also overly bearish as we saw many states revise their revenue expectations higher in the back half of 2020, when the shortfall was not nearly as severe as assumed.

As expected, higher rated bonds held up better than riskier ones.  This held true for both munis (see chart below) and corporate. 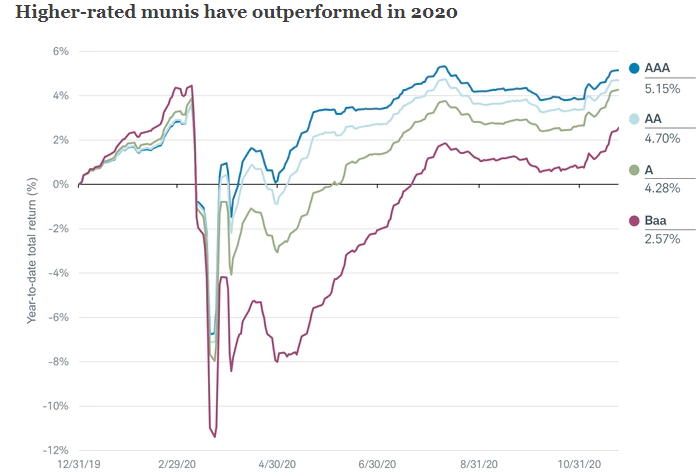 Sandy Cove’s focus has always been on insuring quality in fixed income, over potential returns.  We have selected our bonds managers based on the premise that capital preservation is more important in this asset class than growth.

Given the volatile year and unprecedented economic, market and government move that occurred, our Investment Committee met multiple times (via conference call) to ensure client portfolios were positioned to first, protect principal, and second to grow in a risk-adjusted manner.  We discussed the most important attributes of portfolio construction during a downturn, for example, cash being “king”, quality shines through, and strong leadership is critical.  We were also aware that tough times do lead to better times and there is a time to play defense and a time to play offense.  Out of those discussions came actions which we put into practice in 2020, and communicated to our clients throughout the year.

In general, we made the following re balancing moves during 2020:

How were Sandy Cove’s 2020 Market Assumptions?

Last January, before the acronym “COVID” existed, we gave our best educated outlook on what we thought the market themes of 2020 would be.   Obviously, all investment outlooks for 2020 went out the window in less than three months when the pandemic hit.  However, we pegged three themes correctly:

On the minus side, the global pandemic negated our positive economic outlook.

Another theme we thought would play out in 2020 was a stronger international return given low valuations.  While this was not the case for the international index benchmark (MSCI EAFE), Sandy Cove’s actively managed international managers significantly outperformed their domestic counterparts.

Year 2020 was a year of drastic market volatility coinciding with major political elections.  We had a 10-year bull market come to a fast halt in February and an ensuing deep bear market take hold. But the bear market lasted less than a month.  We had election outcomes that took a week determine.  It was enough to make our head spin.  All these major events put emotions on edge, and it’s during these times of crisis that a financial advisor is able to provide a steady hand.  Sandy Cove Advisors kept clients focused on the long game and helped prevent decisions based on fear.

In summary, the best thing about 2020, is that by the time you are reading this, it’s OVER!   Here’s to a healthier, happier and more prosperous 2021.  To hear more about our market outlook for 2021 please read our blog  Sandy Cove Advisor’s 2021 Market Outlook:   Year of the Cure? 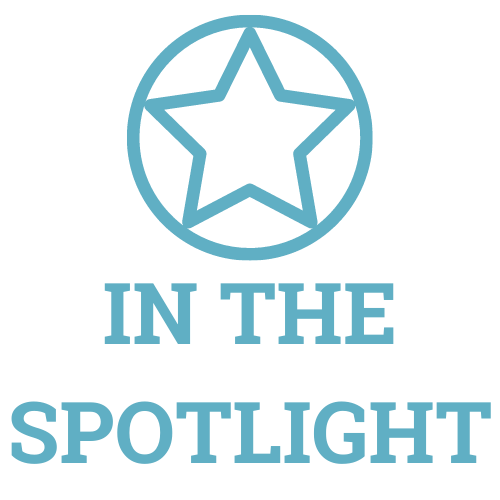 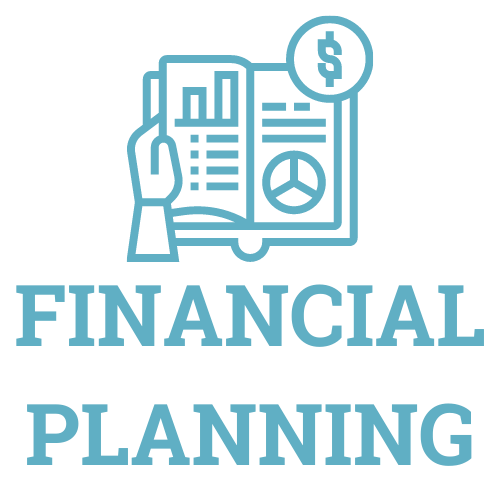