1. Weekly Market Update: The first quarter ended on a high note as large cap stocks posted their best start since 1998 (12%+) and small caps had their best start since 1991 (14+%).  International stocks, bonds, Reits and MLPs also had a stellar start to 2019! See the cheery details below. Also below we touch on Unicorns, Confident Consumers, Trade Talks and the Madness of March Vasectomies.

Last week and this week there has been much to do, and gnashing of teeth, related to the “inversion of the yield curve.” An inversion occurs when short term bonds pay higher interest rates than long term bonds. An “inversion” can indicate a recession on the horizon. The financial press was in high gear this week with all the pros and cons about the reliability of this indicator and this situation does bear close watching.  Late Friday Larry Kudlow, Trump's top economic advisor, called for a 50% cut in the Fed Funds rate.  Such a cut would evaporate any inversion quickly. Kudlow is not worried about the fundamental economy slowing, he just says there is no inflation in sight. One huge benefit we continue to highlight is the ever falling mortgage rates that are now spurring new building for the housing sector.  The 30-year mortgage rate topped out at 4.94% on November 15, 2018 and now stands at 4.06%.The cheaper mortgage rates are, the easier it is for prospective home buyers to qualify and afford new mortgages. This is great news for home builders. 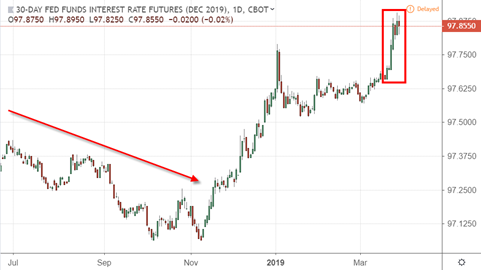 4. Good News on Trade…  Thursday Secretary Steven Mnuchin said trade talks are “very productive.”  Chinese and U.S. negotiators are checking the fine details of a possible agreement to end the nearly year-long trade war between the world’s two largest economies. The focus on the wording of any deal is to make sure both the English and Chinese versions are the same after U.S. officials complained that the Chinese-language text walked back or omitted some commitments made. Treasury Secretary Steven Mnuchin tweeted Friday morning that he looks forward to welcoming China’s Vice Premier Liu He to Washington next week. Markets in Asia welcomed the positive noises from the talks, with the Shanghai Composite Index gaining 3.2% overnight Friday.

5. Leading the Unicorns, LYFT Went Public Friday and traded up 10+% and is now valued at $23 Billion. 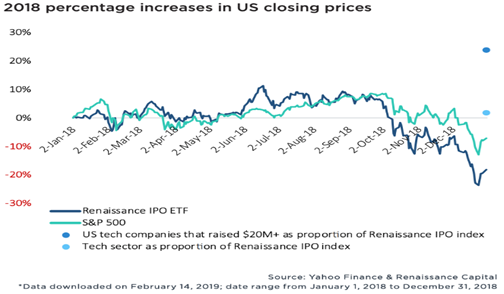 LYFT is the first of many “Unicorn” IPOs that could potentially be coming to market this year.  A “unicorn” is defined as a start-up private company valued at over $1 Billion. If market conditions hold up, we could see many more unicorns being brought to market this year. Uber and Pinterest are expected within the coming weeks. Airbnb, SpaceX and WeWorks may also come before too long. Many of these unicorns have high sales growth levels but are currently unprofitable. This week Warren Buffet said that such companies were not his cup of tea and suggested that average investors stay away. A look at this chart may help to explain Mr. Buffet’s restraint.  As indicated by the Renaissance IPO ETF,  IPOs have been under-performing their established peers in the S&P 500.

6. The US Consumer Feels Fairly Good according to three reports this week, indicating no recession in sight. 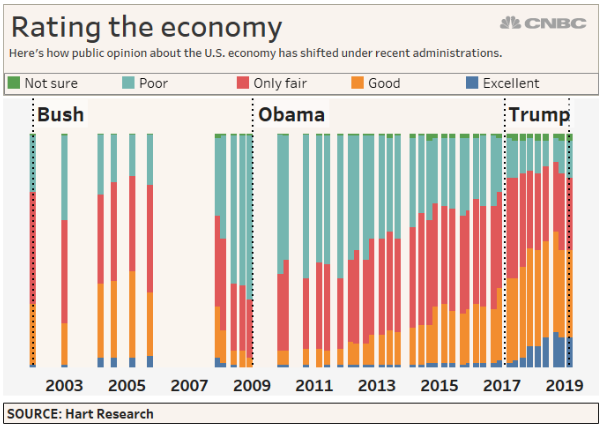 Remember that consumer spending accounts for more than 70% of US GDP, so a healthy consumer can help the economy power through a slowdown. Tuesday’s Consumer Confidence for March dropped to a reading of 124.1 from 131.4 in February. However, 124.1 is still a fairly lofty number. This measure hit a post-recession peak of 137.9 last October which was an 18 year high.  Friday’s University of Michigan’s Consumer Sentiment report surprised to the upside at a reading of 98.4, slightly above the 97.8 estimate.  Furthermore, a CNBC poll this week affirmed the upbeat mood of the consumer concluding that “Americans still feel economy is in good shape under Trump”. Half of all Americans surveyed believe the economy is in excellent or good shape, unchanged from the fourth quarter of 2018. As the chart to the left indicates, this is near the highest reading in the 16 year history of the survey.

7. March Madness & Vasectomies: Basketball Bonanza: About 500,000 vasectomies/year are performed in the US. The recuperative time is 2-3 days. Not surprisingly, Fridays are the most common day to have the procedure as it gives a weekend to recover. But some weekends are more equal than others. During the first round of the NCAA Men's Basketball Tournament, vasectomies rise 30% compared to a regular week, primarily because on Tournament Friday they rise 41%! - Elliot F. Eisenberg, Ph.D.